The path of water through the fountains 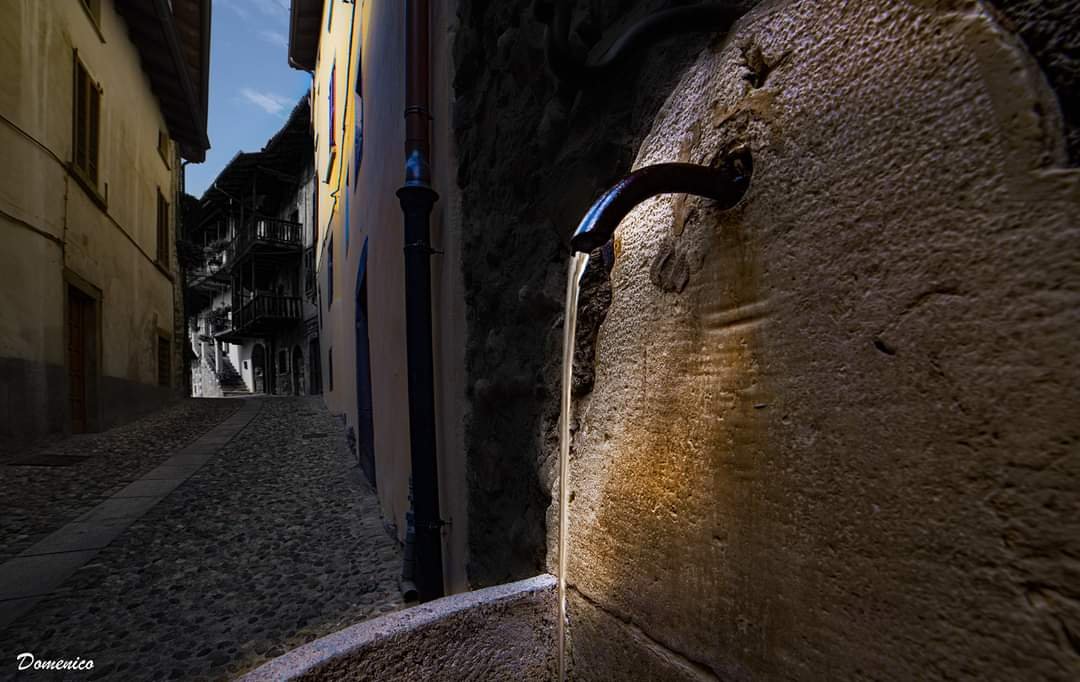 We move away from the Vaso Rè, but we continue to hear the soundtrack of the water flowing through the many public fountains, which characterize the territory of this village so much that it is called “Biénn Fontanéar”.

Let's analyze the most common type of fountains, the semi-arched one in its different solutions:

The fountain in via Contrizio (7) is part of a series of five nineteenth-century fountains, datable to the mid-nineteenth century, in Botticino marble, on a semicircular base with a shaped shaft from which the rounded basin with curved edge develops.
From the bottom, with a curvilinear trend, the gargoyle and the volute hook to support the bucket emerge.
These fountains, in the "SAF" and "SA" typology, are located in via Re (2), in via Castello (4), in via di Mezzo (5), in via Contrizio (7).
The characterization of each is given by the support of the base directly on the ground or on a pedestal, a stone step.
The backdrop, if present, rests on a stone wall or within a niche are in via Contrizio, only in via Resoleto (3) it is not present.
In via Santa Maria (6), via Ripa, via Glere and via Prati (1) we find a recent reinterpretation of this type.

The only semi-arched fountain with a backdrop in the historic center is located in Via Carotti and is a Botticino marble sculpture created by the sculptor Luciano Massari in 1997, on the occasion of the Seventh Bienno Market Exhibition.
On a large quadrangular base stands a vertical slab which forms the backdrop.
In the lower part we find the slightly curved base on which the rounded basin is set that recalls the ancient Renaissance types with pods, as if to form a shell valve.
The gargoyle above is the interlocking of two spherical motifs. At the top of the stele, what most of all determines it is a box representing the rainbow.

Via Fontana and surroundings ...

Let's analyze the different types of rectangular "R" fountains starting from the best known one in via Fontana, the oldest in the churchyard and the most common in via Fantoni, via Ponte Dosso and via Luzzana; then we observe the liberty fountain, now in the playground, or historical fountains in private courtyards. In recent years, fountains of this type have been inserted in the square in front of the Church of Santa Maria and in the square in via Castello, replacing the historical ones that had been moved.

Series of rectangular fountains leaning against a backdrop ("RAF")

Fountain of Via Fontana

Eighteenth century, made of slate, with granite corner pilasters, it has carved, in the front part in the center, a square with rounded corners bearing the date: “F.R./MDCCLXXXIX/C.B.”. Along the edge you can touch the grooves for sharpening blades of various kinds. The backdrop is made of granite with rounded upper corners and supports the rounded basin from which the two outlets emerge. Here we find the initials "C B" (community of Bienno) interspersed with a cross.

Fountain of the churchyard

The oldest Biennese fountain, in Baroque style, built in the early 17th century. Of it remains only the backdrop on a shaped base on which three decorated squares are set: the two lateral ones embellished with acanthus leaves and the central one with a gargoyle rose window, the latter is overlaid with a folder with a mask. The tank was probably dismantled due to traffic problems. During 2005, the Municipal Administration provided for the reassembly of the supports (found below the road level during the works) and the integration of the walls. The Biennese have once again used this important fountain.

Liberty fountain at the playground

In Liberty style, made of grit in the early twentieth century and inserted in the urban expansion area. It develops from a linear base with a rounded bowl with a rounded edge. The backdrop is defined on the sides by two opposing volutes and in the center by a zoomorphic head from which the union comes out. Also worth mentioning are rectangular basin fountains in courtyards such as the sixteenth-century one of Casa Bettoni formerly Morandini and the neoclassical one of Palazzo Simoni Fè, both attributable to the same RAF type.

Within a semicircular niche, supported by masonry pillars, is inserted the fountain with a rectangular basin consisting of four corner granite pillars, which block three slabs of hammered slate where the holes in the housing of the irons for supporting the buckets can still be identified. The seabed is made of concrete and two gargoyles emerge from it. The fountain of Ponte Dosso is very similar in the conformation of the basin, much simpler than that of via Luzzana, which is characterized by a niche that encloses it and which configures it in the RAF type.
It should be remembered that these fountains not only had a domestic use, but were also used to quench the thirst of livestock.

The fountain, still used today to cool off from the summer heat, was built in 1844. It was built using Botticino marble, the initial project involved a statue of a swan on the top of the fountain, the swan was built but was destroyed in the twentieth century. Following this the original project was modified and a pine cone was placed on the top of the fountain. It was conceived as a monumental fountain, consisting of a circular base with an excavated basin that follows its course ending with a rounded edge. In it there are two pairs of irons, to support the buckets. In the center stands a stone with a circular base that develops from a decoration with aquatic leaves and ends with a frame with sculpted opposing volutes. 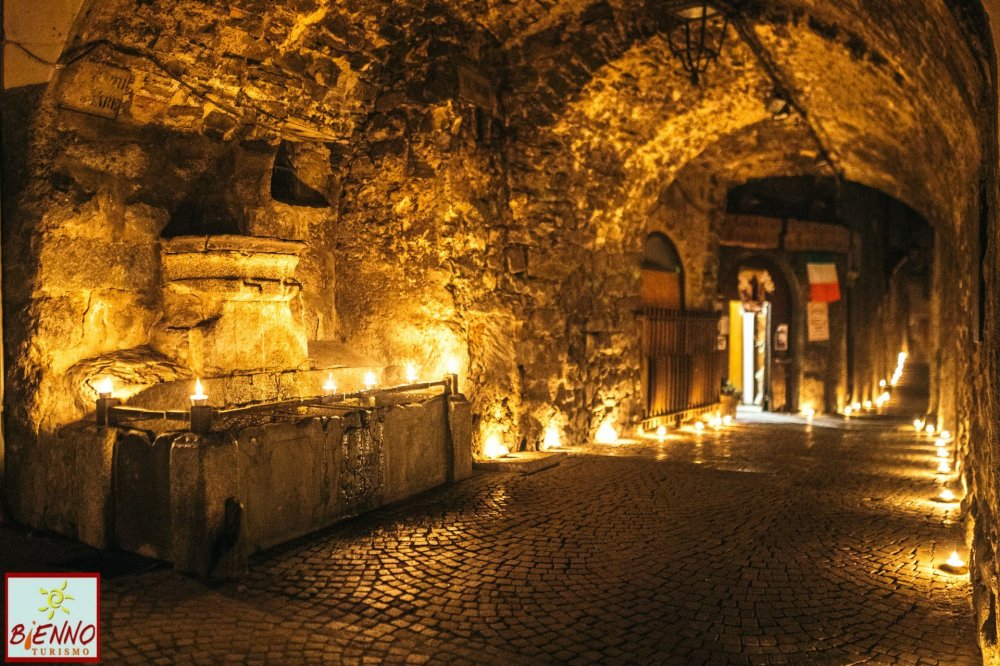 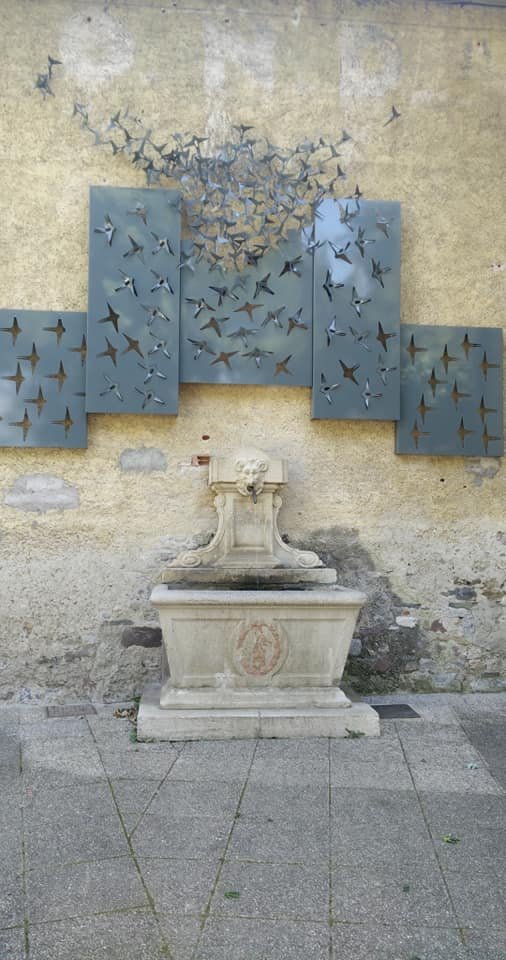 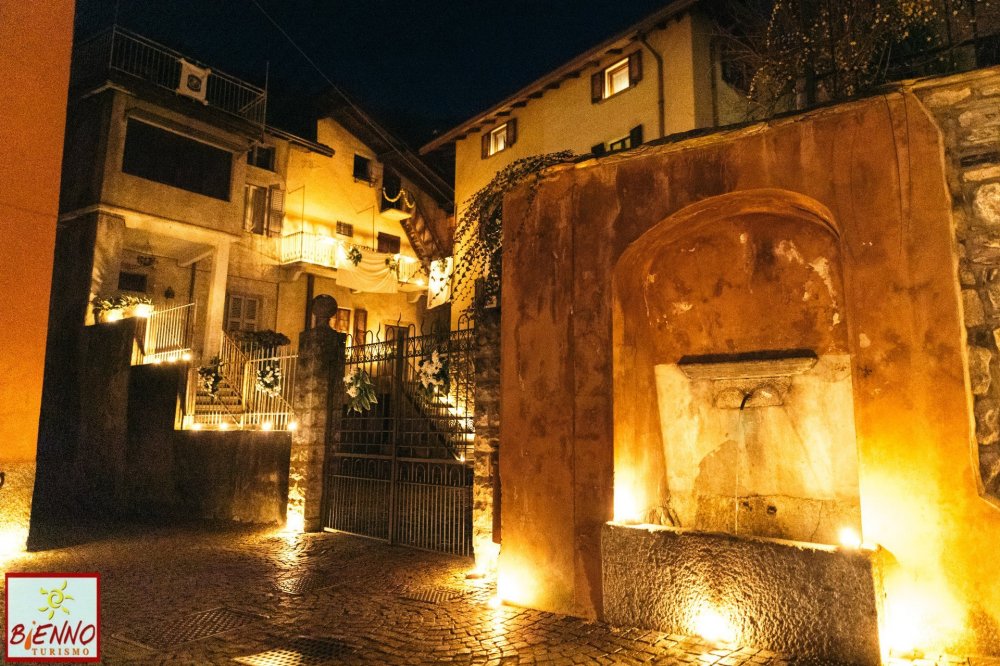 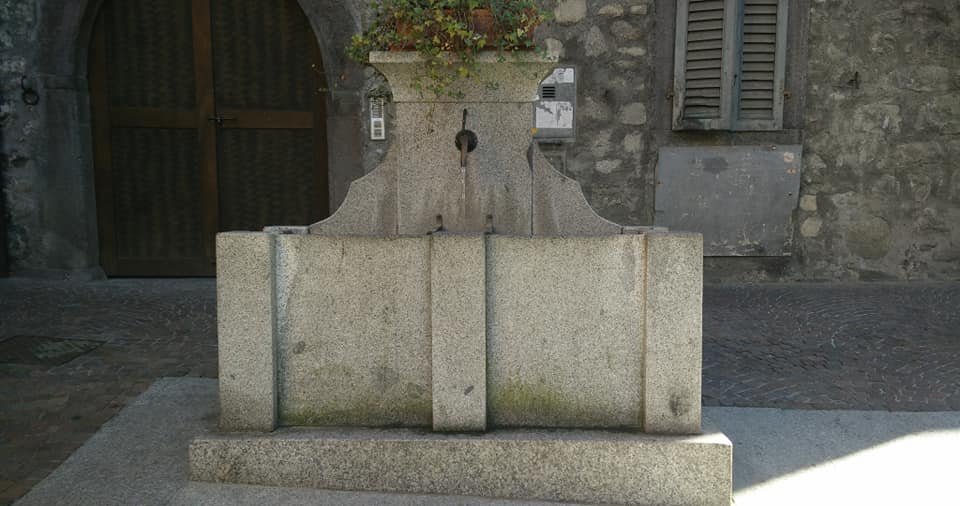 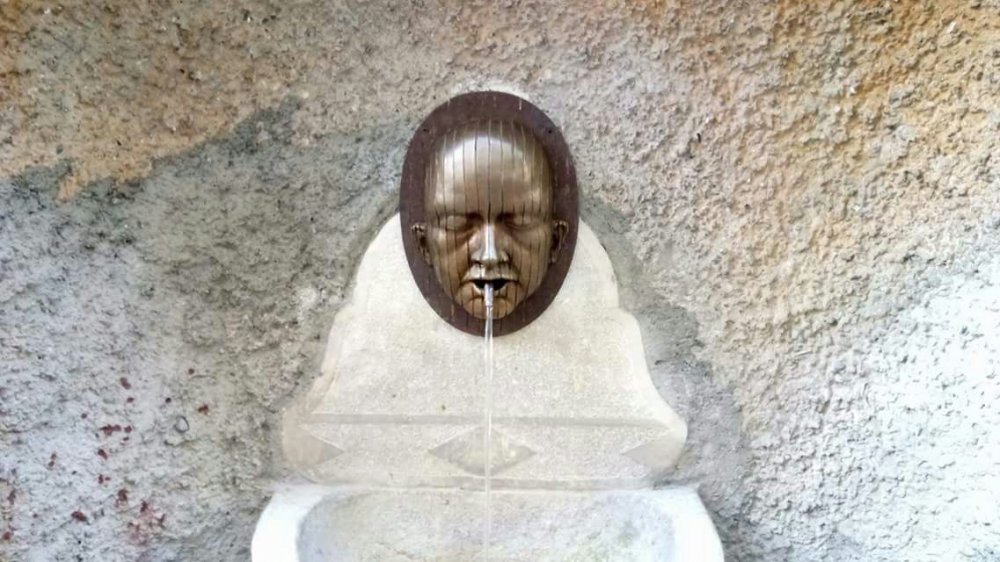 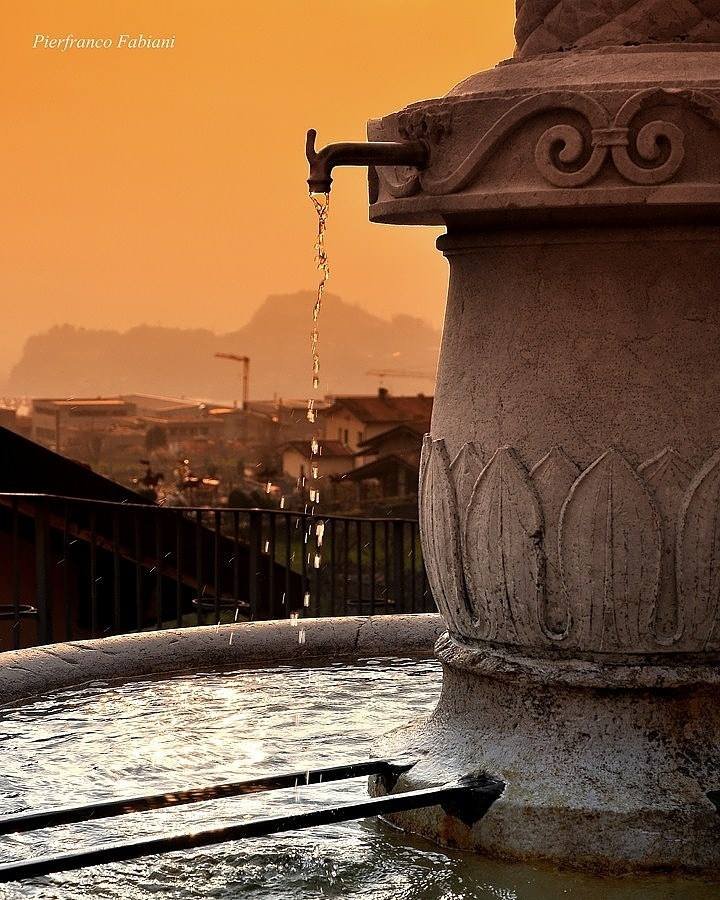 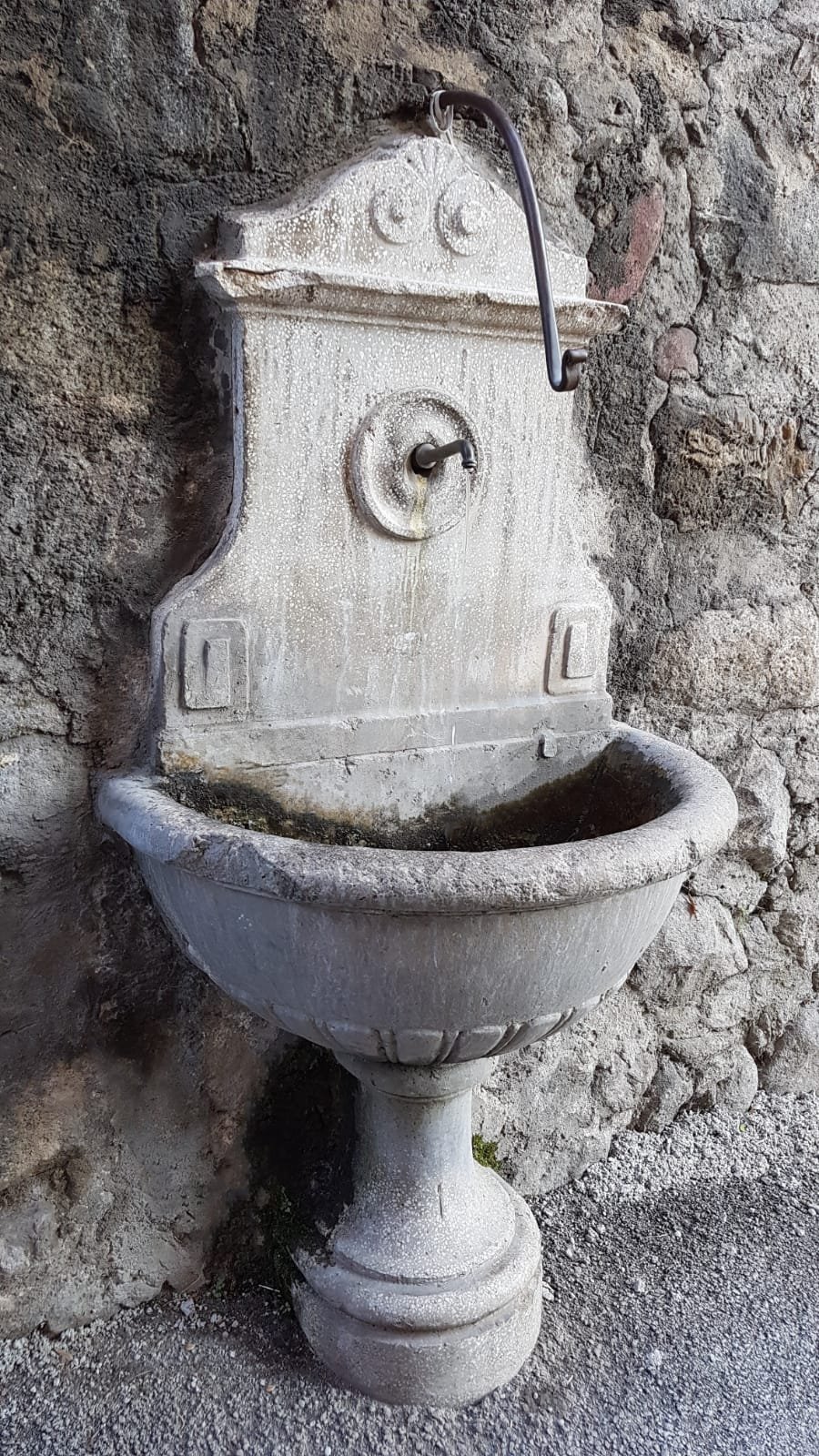